Celebrity Chef Simon Bryant will be teaching 2 special Master Classes at Sticky Rice Cooking School on Saturday 23rd October and Sunday 24th October and the last few places are now on sale in the online calendar so be quick! 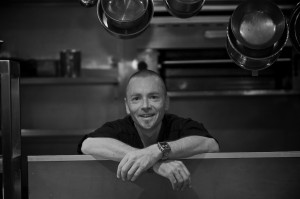 “I didn’t even have time to advertise or publicise these classes before they started to book out” says owner Claire and there are  now only 7 spots left.

Simon was on Claire’s list of top Adelaide Chefs to approach when she first opened the Cooking School back in October 2008 but due to Simon’s previous exclusive contract with the large hotel chain Hilton he was unable to commit until now. “Simon has always insisted that he would love to teach at Sticky Rice Cooking School and indeed he helped promote us via 2 episodes on The Cook and The Chef with Maggie Beer” says Claire. Firstly he filmed a segment with Vegetarian Chef Kurma Dasa who regularly teaches at the Sticky Rice Cooking School and then Chef Yukiko Anschutz was filmed during her Asian Spice Classes.

“I’ve even been told by customers that Simon Bryant told them to come to a class here which is the most perfect kind of referral I could wish for” beams Claire.

As soon as Claire got news that Simon had left the Hilton back in February this year she was straight back onto him with an offer of a Master Class Guest Chef Spot in October…. and this time Simon accepted immediately.

I am really looking forward to not only meeting him ( although he is very easy to get to know on the phone) but also to learn from him in the kitchen says Claire. “I also think he has so much to share with us about the subject of sustainable produce for Adelaide cooks and hopefully I can help spread his teachings throughout our other classes.”

Simon passionately believes in using his profile to highlight Ethical Food issues, including the plight of local producers struggling with drought, animals being farmed unethically, using local seasonal food with less
environmental impact, the use of Australian native foods and the health and medicinal properties of food. Simon Says “The great proportion of our food comes in one way or another from the dirt that we stand on. One of the
greatest things you can do is share this food and respect how and where it came from by making informed responsible choices. More importantly, food should be as natural as when it came from the dirt, with as little harm and
interference in its growing and preparation as possible but, with a maximum of care.”

Claire suspects Simon has also got a very wicked sense of humour as did Michelin Starred Chef David Thompson who was at the school in November 2009. She is already smiling at the prospect of some good old banter and wit whilst on the job!

Simon’s Master Class will be guiding guests through a hands on four course menu focusing on ethical food choices. The emphasis will be largely on free range and or sustainable produce where the animals well being/ sustainability is of much importance as the flavours of the dishes. This is a class for the omnivore who wants to make respectful food choices and those who want to work alongside the highly respected Adelaide chef Simon Bryant. • Papaya and Mango salad with home dried SA Gulf Prawns. • Drunken corn fed free range chicken with pickled pak choy. • Twice cooked crispy Chinese free range pig belly. • Organic hand tapped small batch coconut palm sugar grilled Pineapple, candied peanuts, chilli sorbet. 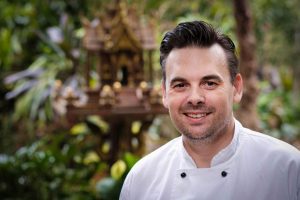 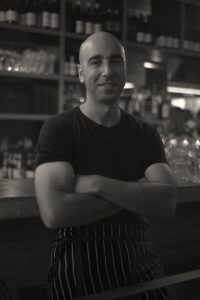 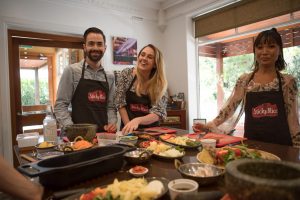 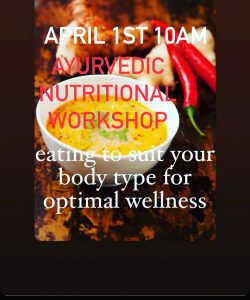